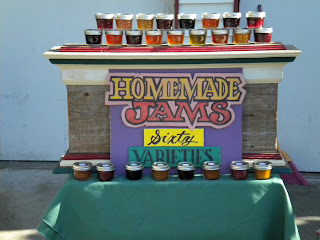 It's been a crazy few weekends so far doing the Fairs. November started off busy with the Scotts Valley Craft Fair and also a private wine tasting/member pick up party at the Dancing Creek Winery where my fig jam was served atop of wheel of goat cheese. The next weekend Boulder Creek Autumnal Craft Fair was filled with many happy locals who used to visit me at Love Apple Farm and great live music -THANKS to my girl BETH who co-hosted the event. The next day I took part in the new pop-up market The Real Mercantile in San Francisco for an afternoon of tasty snacks, gorgeous handmade clothing, jewelry and herbal potions. Saturday November 20th, I'll participate in a trunk show at The Mint Cafe and Wine Bar in Scotts Valley featuring local artists. Sunday I'll be at the Seacliff Inn in Aptos for a Benefit for the Leukemia & Lymphoma Society. Finally visit me at Monarch Communtiy Craft Fair on Saturday November 27 with 50 other arts and crafts vendors.
December highlights include the popular gift show at downtown's favorite Center Street Grill in the Art Center as well as a Holiday Farmer's Market at Silver Mountain Winery at the Summit both on December 4th, the Live Oak Holiday Boutique held at the Grange on the Sunday the 5th. Then off again to San Fancisco for another Real Mercantile pop-up market on December 8th. The Mount Hermon Holiday Boutique will be held the weekends December 9-12 and December 16-19 in conjunction with their annual holiday concerts. I'll be spending Fridays December 10 & 17 at Ivy Company Vintage Resale Boutique in Capitola. If you're Berkeley check me out at the Knit One One Craft Show on Saturday December 11. Finally I'll end the year doing another East Bay Underground Market at the very cool Soundwave Studios in Oakland. Whew! Thank you jam fans who have supported me throughout the year! Check my Event Calendar above for more details on these events.
Posted by Jeannie's Jams at 6:33 PM No comments:

UPDATE 10/29: I will be at Crystal Bay Farm again this Saturday & Sunday October 30-31st from 11-5pm selling my jams!
Happy Halloween!

Join me Saturday October 23rd from 11-4pm for lots of family fun at the Crystal Bay Farm Organic Heirloom Pumpkin Patch for their 3rd Annual Art on the Farm Craft Fair. I'll have many freshly made batches of jams and a variety of samples to share. Their will be 30 local artisans,live music and the event is FREE to the public! They will have 40 different varietals of heirloom pumpkins to choose from so gather up the kids. The farm is located in Watsonville at 40 Zils Road- for a map visit Crystal Bay Farm Website on the bottom left hand corner of the "About the Farmers" page See other super fun events at the Pumpkin Patch here and check out the Santa Cruz Sentinel Article about the farm. Hope you see you there and don't forget your jars!
Posted by Jeannie's Jams at 2:27 AM No comments: 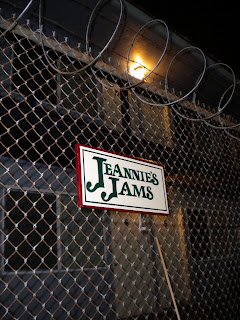 A great place to hang my sign
What a wonderful event again in Oakland last weekend! It was an early fall evening market. We were in the same wonderful secure lot at 24th and Broadway except this time their were 80 vendors selling a vast array of homemade items. We rocked 8-10 different samples and got lots of kudos for my tasty jams and fancy JamStand setup. Some of my favorite vendors are the best Indo-Malay Food you've ever tasted, delicious fresh Vegan Tamales and Horchata from HellaVeganEats, I picked up more Nanny's Homemade Mustard, got some delicious Limoncello Marmalade from MoFoods, insane Jamaican chicken and extremely intense ginger brew by Jerk and gorgeous fresh tarts by Sweet Francisco - and there's so many more. Check out Forage.SF for the next market event and learn more about their wild food walks and dinners.
Posted by Jeannie's Jams at 1:40 AM No comments:

Posted by Jeannie's Jams at 8:33 PM No comments: 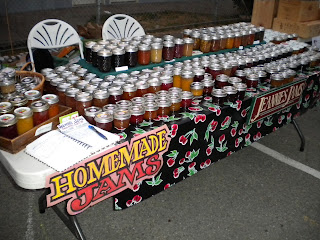 Hey come check out Jeannie's Jams at the San Jose Biennial Music and Arts Festival. I will be part of the street faire in the food area of the festival this Friday September 17th from 5pm-12am. We will be introducing hot PB&Jeannie's Jam Sandwiches as well as a cream cheese version. Just had one- oh my! Some links for Street Faire info and for Music Festival Line-Up so you can check it out. The best part it's FREE!

I will also be opening my JamStand back up this Sunday September 19th from 12-6pm. I will be open during Open Studios Tour weekends also. You can now check my Events Calendar tab at the top of my website, or check Zvents by entering "Jeannie's Jams" in the search box to see when my stand will be open. To get on my newsletter list email me the word "Yes" to JeanniesJams@gmail.com Thank you all for your support!
Posted by Jeannie's Jams at 4:26 PM No comments: 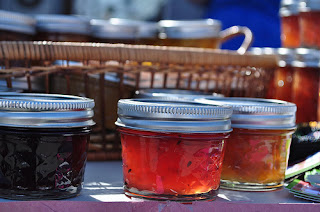 photo by FoodieSusie
Hey there, it's time again for a visit to my little neighborhood jam stand and get your fill of some freshly made artisan jams made by your truly. I have at least a couple dozen varieties of your favorite seasonal flavors you've been missing like Santa Rosa Plum, Apricot, Bing Cherry and my famous White Peach Lavender Jam among others.

So gather up your empty jars for me, tell all your friends about it and swing by my sale on your way to the beach! My jam stand will be open from 10-4pm Saturdays and Sundays at 530 Windham Street (Click here for directions)) I will have my stand open for 3 weekends before I am off to do the SF Underground Market again.
Posted by Jeannie's Jams at 4:20 PM 1 comment:

Hello there jam fans! I'm back at it again- putting sunshine in jars. You can have first dibs on fresh batches of seasonal favorites if you visit me this Saturday in Oakland, for a merry late afternoon evening of eat, drink and be merry foodie fest hosted by ForageSF from 5-11p at Broadway & 24th Street. There will be live music and beer and wine. It's cost only $2 just visit the ForageSF link above to print out your tickets. Can't wait to see my East Bay Peeps!
And don't forget your jars!
Posted by Jeannie's Jams at 7:14 PM No comments:

If you are around this Memorial Day weekend, be sure to come out and visit me one last time at the Farm. Love Apple Farm is having their last weekend of tomato sales for the year Saturday and Sunday from 10-3pm. They are starting a new farm so this may be the last time to tour the gardens as the new farm will not be open to the public except for classes.  I've got new delicious flavors like my new Raspberry Rhubarb or Blackberry Meyers Lemon- you thought the Strawberry versions were the best-wait until you try these! Grab some undeniably insane Apricot Pineapple jam- this batch is quite special, made from a super ripe pineapple that has vanilla & coconut notes- WOW! Thanks to all my Ben Lomond Jam Freaks- I will miss seeing you at the farm. Thank you Cynthia from Love Apple Farm for the honor of managing your Tomato Plant Sale and Farm Stand for the past 4 years. Hope to see you all this weekend - don't forget your jars! checkout out the farm's website at GrowBetterVeggies.com
Posted by Jeannie's Jams at 5:33 PM No comments: 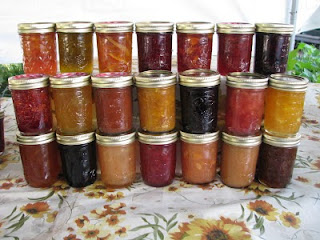 Ah, Spring is here and that can mean only one thing! It's time to visit Love Apple Farm to stock up on Jeannie's Jams and get a zillion precious and unique varieties of heirloom tomato starts! I currently have over 60 varieties of small batch homemade jams with yummy samples for tasting! We are now open Saturdays, Sundays and Tuesdays from 10am-3pm through May 30. Love Apple Farm is located in the Santa Cruz Mountains in Ben Lomond California. You can read all about the farm at http://www.growbetterveggies.com/
Can't wait to see you there!
Posted by Jeannie's Jams at 12:51 PM 2 comments:

When Life Gives You Lemons....Make Marmalade! 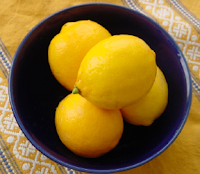 By years end I'm so exhausted from the long season of canning and selling my jams I escape all things "kitchen" for the holidays. Recently while on vacation in Arizona, a friend brought me Tangelos and fresh Kumquats she'd just picked. The next day another friend brought over Grapefruits from his backyard. Ok I thought, its only the second day of my vacation. I had envisioned a little more time to relax and dream of the citrus of my future. Oh well, as luck would have it, I was working.

After eating my fill of those luscious Tangelos I made a couple of batches each of regular Tangelo Marmalade and some with Royal Crown Whiskey. I like the idea of Whiskey with citrus. Kinda reminds me of a "Hot Totty". Did you know that a Tangelo is a cross between a Pummelo and a Tangerine? Cool huh?  Next I made Kumquat Marmalade.  I usually add orange to the marmalade but I added clementines for a change (besides I didn't have any oranges but an obscene amount of clementines.) Kumquats are used medicinally in Asia, as a tonic of sorts. Makes sense since Citrus originates from the area. The hardest project though proved to be the Grapefruit. I carefully peeled the rind from the grapefruit for what seemed like hours to ensure none of the bitter pith was attached to the rind and made sure the cut strips were uniform. I set aside more than half of the peel for candying later and added the rest to the sweet yet bitter bright pink flesh.

When I arrived home I was so excited to see the Meyers Lemon tree was LOADED with ripe lemons! More for my Strawberry Lemon and Mango Lemon Marmarlade and the glorious Meyers Marmalade. You can never have too many lemons! I am amazed that people in my neighborhood don't pick their Lemons and other citrus loaded trees in their front yards. They are the treasures of the winter. Free, organic and just right for winter's chill. MY FAVORITE is Blood Orange Port Marmalade. When you slice them they are like sunsets inside.  When you add the Port in the end it it sizzles and really makes it a lovely deep garnet color. I love making marmalades. They are truly like capturing sunshine in jars!
Posted by Jeannie's Jams at 10:26 PM 2 comments: